And am disproportionately annoyed that the Neopian Times now opens in the same tab when you click it in New Features.

Hi! Would you guys ever consider giving the converted Faerie Ixi a redesign like what ya'll did for the Transparent Peophin? It hardly resembles the original one! I think it could use some tidying up. What do ya say? (Please remove my username!) ~ username removed
Hi! So we get a few of these requests, but unfortunately, we have no intention of re-designing any released pet colours. There may be some revamp that goes into designs between unveiling and releasing, but once they are released, we won't make any changes unless there is an actual issue to be fixed. After all, how would you feel if you woke up to your beloved pet changed because someone else decided it should be? Oh, uh, that's right, a few years back that whole... Whoops. Anyway, you get the idea, moving on!

I doubt anyone not currently on hiatus can have missed that after a few months' dearth of original content, there's suddenly a new activity on Neopets, possibly part of what TNT meant when they said they'd be working on games and dailies.( Collapse )

There's a lot of places where it seems like more thought could have gone into this daily, but for me, it's also an intriguing moment of new thinking, on side accounts and giftboxes both. If TNT choose to take these ideas anywhere once the summer's over -- and it's anybody's guess whether they will -- we could have some interesting places to go, whether or not we ever see hide or hair of Trudy again.

The barely-getting-started day of summer that for some reason we call Midsummer's Day is my Neoanniversary, and normally I try to write at least a little something on this blog as a celebration and an expression of thanks.
( Collapse )


(Blog transparency note: I'm backdating this because it was written more than two weeks ago, and only failed to be posted because I came down with a horrible fuzzy-brain-inducing cold. A much less sentimental entry to follow soon, I promise.)

SVL: Dispatches from a Discontinuity

Among other projects at the moment, I'm trying to learn Japanese. (Why Japanese? It seemed cool at the time.)

It's an ongoing process, and at the time of writing this I'm somewhere in the skill range where you know just enough of a language to make an utter laughing-stock of yourself. I've been given a few tips by more accomplished learners, and one of the ones I keep hearing is "See if your favourite leisure activities can be done in Japanese." It's worth a try. So I'm dipping into J-pop and J-rock as background listening for my commute, I've swapped the interface language on my phone, and then I guess there's… Neopets?

At first I dismissed the possibility, because I was pretty sure I knew the languages that I'd heard of people playing Neopets in -- Portuguese, Dutch, what-have-you -- and I didn't remember Japanese being one of them. But when I looked, there was an option for it, nestled in near the bottom of the language list. 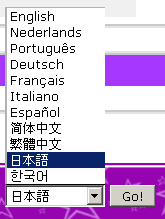 Nothing ventured, nothing gained. Let's poke it with a stick.

Like a lot of Neopians, I've been wondering over the last several months about the status of the Beta Battledome. It was always my speculation that the high battle traffic caused by the War for the Obelisk would provide valuable data for the next version of the beta, so I was a little surprised when the months following that plot saw no new modifications to the 'dome -- no communications on the beta landing page, even.

Well, now we have some news, but it's not the good kind.( Collapse )

Since Neo inexplicably doesn't mark anniversaries (even my lookup shield currently still says 9½), it's up to me, as it has been every year. And while of course I'm out in Neopia Central buying pixellated cake as normal, this time around the number gives me pause.

When I think about my time in Neopia, it's perhaps too easy for a real sense of time to escape me. The Altador mini-plot and the Day of the Meepit of Peace, the Journey to the Lost Isle and the day I adopted my Usul, the Pound reopening and Petpet Park opening and being on the peak-time HC the night of the Singapore glitch and my first Neopian Times publication, TFR and jnCon and the day we had a snowstorm in the middle of July -- everywhere I look in Neopia, there are reminders that bring them all back, clear and bright. Each one has become a part of the Neopian life I've built around myself, so near at hand that it's easy to forget what that "120 months" next to my name and NeoTitle really means.

Here is a random fact: several years ago, when the Underwater Fishing Vortex (or Fishing Hole, as it was then called) first opened, I assumed the creatures coming out of it were new Petpets. I paid over the odds for one of the first Tanglepuses (Tanglepodes?) on the Trading Post and tried to attach it to one of my pets -- only to find, of course, that it didn't work, because they're designed to be food.

I was horrified. Back then, I wasn't a vegetarian in real life, but the character and aliveness of the fish art made me feel like I would be a monster for feeding them to anyone. So I didn't. I made a fish gallery instead, and put any fish that wouldn't fit in it into my SDB (which I can only imagine is mostly full of water by now). I rescued a bunch of fish from the Money Tree to add to the collection, adamant that I would not allow fish-abuse in my Neohome. And to this day, only one of my pets has ever eaten an Underwater Fish, and that was an accidentally mis-pressed button.

Today, after waiting through another seemingly interminable 11-hour countdown, this happened.

The idealistic part of me is applauding my understanding that principles are not something you get to have only when it's convenient, and creating a vaguely shimmery glow of righteousness that's saving my pets a few Neopoints off their electricity bill.

The rest of me, on the other hand, is just mourning for that lab coat.

Well, Something Has Happened. Or, perhaps, Is Happening. We've collectively found a spaceship entrance portal in Moltara, occupied by a slightly eccentric Lutari scientist. (Neopia seems to have mostly eccentric scientists, as far as we've seen. I don't recall meeting any entirely sensible ones to date.) Now he's sending us out to scavenge parts for his machinery. While I am sure he's earned his scientific qualifications in some fashion, I'm really not convinced that building sections of your equipment out of snowballs when you've got a door that opens onto Moltara is entirely the best idea.

This being Neopets, of course, the spaceship doors were barely open before somebody asked the eternal question. Guys, do you think this is a plot?